You are here: Home / Downtown Directory / The Raney House Museum 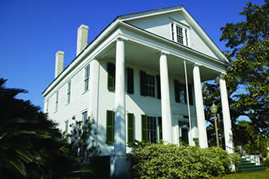 This stately Greek Revival house was built in 1836 and is listed on the National Register of Historic Homes. It is owned by the City and managed by the Apalachicola Historical Society. David and Harriet Raney had three sons who served in the Confederate forces. One son, David G. Raney, Jr., was a marine officer aboard the C.S.S. Tennessee which was captured by Union naval forces in the Battle of Mobile Bay in 1864. David was captured but escaped and made his way back to Confederate lines. Members of the Raney family lived in the house until 1914. The City of Apalachicola purchased it in 1973 and established the Raney House Museum which exhibits furniture, documents and artifacts of the 19th century. Corner of Market St. and Avenue F. Open to the public 1:00 pm–4:00 pm Sunday through Thursday; and 10:00 am–4:00 pm on Fridays and Saturdays. Admission is free but door donations are accepted. Special group tours available.